How far along: 11/12 weeks
Total weight gain: +4 lbs
Maternity clothes: I have been in maternity pants since about week 9!
Sleep: Still pretty tired but can defiantly feel the energy starting to return. I am not requiring my daily naps on my days off like in weeks past.
Miss anything: I saw a billboard for Shiner's new beer for summer Prickly Pear and my mouth watered a little. I am hoping they bring it back next summer so I can try one.
Movement: Just this week (week 12) I noticed 3 different times the distinct flutter feeling!!! I was so in shock that I could feel the baby this early, I had to ask around. After talking with several girlfriends that have had 2nd babies they all told me that they too felt baby move this early!!
Food cravings: salty things, and MILK (chocolate, strawberry, plain… its all good)
Anything making you queasy or sick: I am feeling much less nauseous this week, still very tired. I am been much more sick this pregnancy that I was with Tanner.
Gender: We don't know yet. I have had a feeling for a few weeks thats its a girl. Every time we ask Tanner if its a brother or sister he says "sister!" 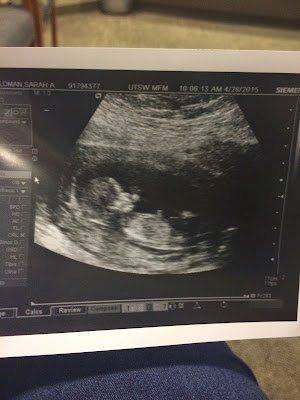 Kris and I have been married for 5 years We have 2 beautiful children, Tanner our 2.5 yr old and Linley our sweet newborn.